Starting in high school and moving into his first year at college, Harding learned of and became interested in Henry David Thoreau. This collection includes a variety of articles and photographs that deal with those earlier years of study when Harding first embarked upon the journey of studying Thoreau.
The collection includes a handful of articles - stories of the first time he heard of Thoreau, the first time he read Walden, the first time he knew he would devote most of his life to studying Thoreau, etc. There are also a few photographs of Harding from that period in his life. 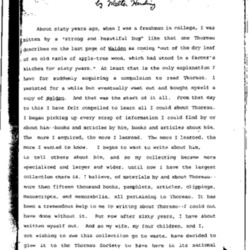 In the first part of this article, Walter Harding describes how he had a sudden "compulsion to read Thoreau". He put in a lot of time and effort in his studies of Thoreau and building this collection of documents about Thoreau. He later goes on to… 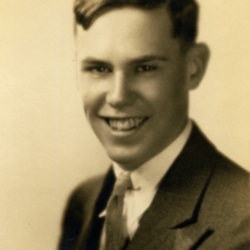 A photo of Harding from 1934 - just two years before he started studying at Bridgewater state college. This photo is from the same year that he first became interested in Thoreau after a high school English teacher recommended his work to Harding. 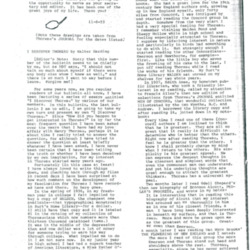 Inspired by the writings of other Thoreauvian scholars, Harding tells of the start of his own interest in Thoreau. Harding first read Walden in college, even though he was interested in Thoreau years before due to an old high school English teacher. 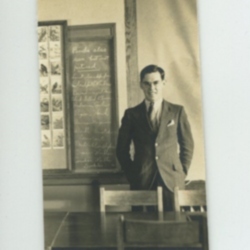 A photograph of Walter Harding at Bridgewater State College in 1936

Adventures in the Thoreau Trade 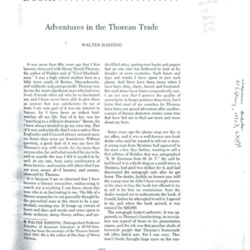 In this document, up until the line break on the second column of this page, Harding explains how he became obsessed with Henry David Thoreau in high school. He goes on to discuss his fascination with Thoreau and what has become of it.

Adventures in the Thoreau Trade Part 2 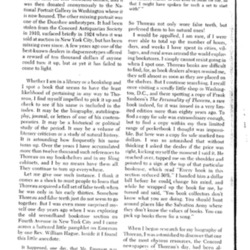 Starting after the line break in the left column, Harding describes an incidence where his love of Thoreau lead him to learn even more about him in an unexpected circumstance. 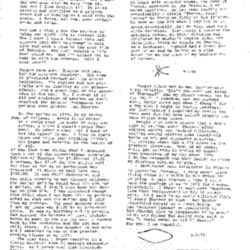 The second half of the "I Discover Thoreau" document. Harding address the question of if he ever gets tired of studying Thoreau. 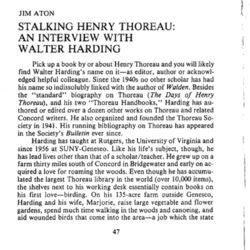 In the beginning of this interview with Walter Harding, Jim Aton (a Geneseo student at the time) describes the various works of Harding related to Thoreau. He then goes on to explain the similarities between Harding and Thoreau while introducing the… 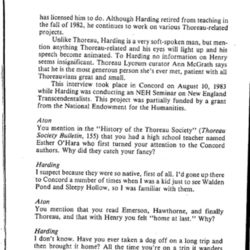 In part 2 of this interview, Aton asks Walter Harding some questions about how he began his career as a Thoreauvian. Harding describes his feeling of being "home at last" when he finally read Thoreau
View all 9 items