While on-campus, Kelley was often busy working on his next novel, A Drop of Patience, where he held release and book-signing events.  This was the culmination of Kelley's work on Geneseo, as students were able to gauge first-hand the entire process of releasing a novel. He was consistently swarmed by students with a myriad of questions, about city life, authorship, foreign countries, and his own experiences, but he was always ready with some advice and a guiding pen.

Kelley was only briefly on-campus for that period of January to May of 1965, where he soon after left the campus in pursuit of other endeavors. Rather than become complacent, Kelley quickly spirited himself away from the teaching life and back to the role of pure authorship, the campus enriched but saddened by his all-too-brief presence.

However, while Kelley was rather fond of his time on campus, especially with assisting the students, he also found that it had a negative effect upon his writing. In a letter sent to an interested former student several years after the fact, Harding stated that Kelley was so invested in his students that he was often distracted from actually getting any writing done. Also, the in-depth discussions with students about their writing had made him somewhat self-conscious about his own work. Perhaps the work of bringing knowledge to others comes at a sacrifice to one’s own ability, a practice that the twenty-seven year old Kelley was not yet ready to give up.

Harding and Kelley would continue to retain relatively good relations after Kelley’s departure, with Harding understanding of Kelley’s apprehension. Overall, Harding’s experiment to bring a first-class author on campus was a resounding success. While Kelley may have been anxious about his writing, he inspired a year’s worth of students with his abilities, and remains a proud reminder of the caliber of Geneseo’s faculty, both past and present. 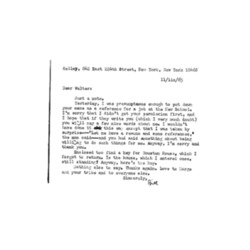 A letter from Kelley to Harding 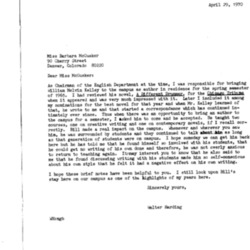 Harding's Response to McCuster (a former student inquiring about Kelley)